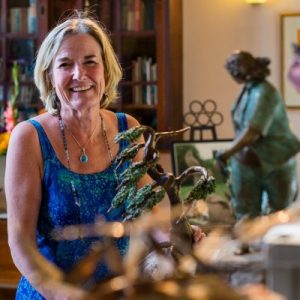 The Huntsville community was deeply saddened last January by the sudden death of Brenda Wainman Goulet. Brenda was an accomplished metal sculptor, our friend, colleague, and a founding member of Artists of the Limberlost. She has left a profound legacy in the sculptures she created both for public spaces and for private clients.
Brenda was also a dedicated mother, and her youngest daughter Danielle Goulet followed in her footsteps and became a jeweller, working with metal and stone on a smaller scale. Danielle has been Brenda’s guest artist on the Artists of the Limberlost studio tour for the past 5 years, and will be exhibiting again this year, in the “Court House” at Billie Bear Lodge.
Danielle has planned a display to celebrate and remember her mom, and she’s bringing all of Brenda’s last original works of art, though none will be for sale at this point. She also plans to display pictures, drawings and poems of her mom’s, and she’s put together a collaborative project in which the public is invited to help create a piece of art in Brenda’s honour.
Danielle is looking forward to the Artists of the Limberlost Tour this weekend and remarks, “As Brenda would have said, the show must go on!”
The Artists of the Limberlost Open Studio Weekend is this weekend, August 18 and 19, from 10 am to 5 pm each day. The public is invited to visit 7 studios and meet 20 artists along the Limberlost Rd near Huntsville. Danielle will be at Studio 7 on Billie Bear Road, along with painter and printmaker Janet Stahle.